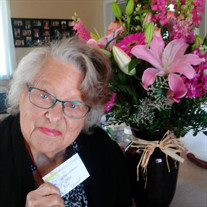 Vera Joan Pierce, 12 days from her 95th birthday passed away peacefully at home in Morro Bay surrounded by her family, Monday, September 27, 2021. Vera was born October 9, 1926 in Berkeley, California the fourth of five children born to Sebastian DiMartini and Elizabeth Hattie (Smith) DiMartini. Vera's father Sebastian emigrated to San Francisco from Palermo, Sicily. Her mother Elizabeth was born in San Francisco of Irish Decent. When a young girl, Vera's family moved to Bakersfield, CA. She attended Catholic School at St. Francis Parish in Bakersfield. At the age of 13 Vera came to the Central Coast with her mother, her mother now widowed, came for work at Camp San Luis during World War II. Vera attended San Luis Obispo High School. Her first job was in Morro Bay at the age of 16 making milk shakes at the pool hall, which was then located behind what is now Legends Bar in Morro Bay. Soon she was in the back learning how to make the Chili and Vera's cooking acumen began. In the 60's Vera was the main cook at the Harbor Hut Restaurant on Embarcadero, her menu creations are still posted on the wall at the Harbor Hut. In July 1947 Vera married Ernest "Skinner" Pierce of Morro Bay, they had 7 children, 13 grandchildren, 19 great-grandchildren and 4 great-great grandchildren. Vera was widowed on April 1, 1983 when the largest landslide to happen in California history took Skinner's life while he was operating a skip-loader clearing the road of debris working a stretch of highway on the Big Sur Coast. The following year, Vera, along with her eldest daughter Pamela Flood opened the popular Pier Cafe Restaurant in Cayucos. Vera became famous for her seafood dishes, she could often be seen at the front table cutting sour-dough bread into cubes for delicious bread pudding and croutons for salads. The Pier Cafe closed in 2004 after 20 years. Vera was a good listener and natural storyteller, she loved nothing better than hearing her families escapades while out and about. The Pierce Family was a family of storytellers. It was said that Vera could have had a career with the CIA, such was her ability to get the most unsuspecting to reveal their darkest secrets. She had artistic talents that were passed down to her children and grandchildren. Her daughters remember in their childhood how she would draw a model and dress out on scrap paper, later making a pattern to cut fabric for a dress, for one of her daughters to wear. Vera and Skinner would entertain their children with sing-a-longs on car trips, Vera would start a song to begin the game of "Name That Tune". She could remember all the songs from the 40's, she once at the age of 12 got up on the back of a flat bed truck in a grocery store parking lot in Bakersfield and belted out "It's a sin to tell a lie". She said later "A girl with a fringe skirt and boots, swinging a lasso won the contest. The girl was good, I would have given her the prize". In her later years she took Aqua Kenetics classes at the Cuesta College pool. Although Vera was a non-swimmer she mostly went so she could be the star of the class with her ability to lead the others in song after song. "Sing another one Vera". Up until her last 4 days she would sing a song, telling her caretakers of her singing exploits. Vera is proceeded in death by her parents Sebastian and Hattie DiMartini, her sister Josephine Righetti, brother Sam DiMartini, sister Ann Rodgers, son-in-laws Larry Flood and James Perry, and her husband Skinner Pierce. Vera is survived by her sister Mary Flores of San Luis Obispo, daughters Pamela Flood, Cynthia Soto, Suzanne "Dee Dee" Perry of Morro Bay, Bonnie Pierce of Alaska, sons Edward Pierce (Debra) and Joe Pierce (Renee) of Morro Bay and daughter Hattie Pierce of Morro Bay. 13 grandchildren, 19 great-grandchildren and 4 great-great grandchildren. Vera was often called the "Universal Aunt" such was the love she gave to the many nieces and nephews, all will miss her visits and her keen interests into what they have been up to. Vera's mind was sharp till her last days. The Pierce family would like to thank Central Coast Hospice for the exceptional care in Vera's last days. They made it possible for her to spend her last days in her home on Chorro Creek. Warmest thanks to Father Ed Holterhoff of St. Timothy's Catholic Church, Morro Bay for your prayers and friendship. Vera's family will have a private burial. Friends and Family are planning a celebration of life to be held at a later date. In place of flowers or donations, memorial contributions may be sent to Achievement House, Inc., 3003 Cuesta College Rd. San Luis Obispo, CA 93405. You may send any correspondence to the family at 475 Chorro Creek Road, Morro Bay, CA 93442

The family of Vera Pierce created this Life Tributes page to make it easy to share your memories.

Vera Joan Pierce, 12 days from her 95th birthday passed away...

Send flowers to the Pierce family.