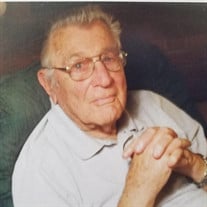 Robert "Bob" LaVern Stratton, 95, of San Luis Obispo, peacefully passed away at home on July 2, 2020. Robert is predeceased by his parents Edwin and Grace Stratton and his sisters Pat Stein and Charleen Lungren. He is survived by his wife Lois and his three children; Steve Stratton of Eureka, CA; Cheryl Strecker and husband Joe and their son Tom of Fort Collins, CO; and Gregg Stratton and wife Mary Kay and their children James and Maddie of San Luis Obispo, CA. Bob was born on Sept 12, 1924 in Hastings, Nebraska to Edwin and Grace (Simmering) Stratton. He attended Hastings Senior High School where he played football. His studies at Colorado University at Boulder in Mechanical Engineering were interrupted by WWII when he was drafted into the US Army. In April 1945, he was stationed with the 3117th Signal Service Battalion on the island of Ie Shima near Okinawa. After the war Bob benefited from the GI Bill to return to CU Boulder to complete his Mechanical Engineering degree and graduated in 1949. His engineering career began working on the construction of the Grand Coulee Dam in Washinton. Bob entered the burgeoning aerospace industry in Los Angeles, CA as an engineer with Garrett AiResearch. In 1955 Bob met Lois Black, then a stewardess with TWA, and they wed soon thereafter in Pennsyvania, Lois' birthplace. On their European honeymoon they especially enjoyed touring Switzerland. They made it a point to continue traveling throughout their marriage. In 2019 Bob and Lois celebrated their 63rd wedding anniversary. Bob's work in the aerospace and engineering industry led to satisfying jobs throughout the US with Garrett AiResearch and Janitrol Aero. He helped design the original engines of the Goodyear Blimp, and worked on the Mercury and Gemini space projects. The family enjoyed their time in many different parts of the country - Indiana, Louisiana, Alabama, and Ohio. They returned to California in 1968, living in Palos Verdes and then moving to San Luis Obispo in 1989 after Bob's retirement. Bob and Lois built their home on a lot overlooking Cerro San Luis and Bishop Peak, a property they first visited when hiking a hillside during a visit with their children who were attending Cal Poly. Bob and Lois felt fortunate to live with wonderful and helpful neighbors. Bob also enjoyed the many friends and acquaintances he met participating in RAMS Club and Noontime Kiwanis. In 1993 Bob was named Noontime Kiawanian of the Year. Bob enjoyed the mountains and organized many cross-country trips with family to share his love of the outdoors. Vacations often led the family to national forests and scenic mountain vistas, such as Estes Park, CO and family ski trips. Bob and Lois also enjoyed solo annual ski trips to Park City, Utah. Bob grew a full western beard while traveling with the 1990 Wyoming Centennial Wagon Train, showing everyone his rugged style as he drove a covered wagon. Bob and Lois continued international travel throughout their marriage, including trips to Russia, China, and various European destinations. On these trips he and Lois made it a point to visit bakeries to sample their local flavor. He and Lois shared their 50th wedding anniversary with their children and grandchildren at Disneyland Park in Anaheim, which coincidentally was also celebrating a 50th anniversary that year. Bob enjoyed time with family and shared his easy going good humor throughout his long life. A private family Celebration of Life is planned over his birthday weekend later this year. His family would like to express their appreciation for the the nurses and staff of Wilshire Hospice and the in-home aides and staff of Amdal In-Home Care for their recent caring attention to Bob.

Robert "Bob" LaVern Stratton, 95, of San Luis Obispo, peacefully passed away at home on July 2, 2020. Robert is predeceased by his parents Edwin and Grace Stratton and his sisters Pat Stein and Charleen Lungren. He is survived by his wife Lois... View Obituary & Service Information

The family of Robert Stratton created this Life Tributes page to make it easy to share your memories.

Send flowers to the Stratton family.