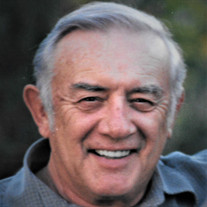 Robert Eugene Atkinson, Sr. April 13, 1932 – April 20, 2022 Robert Eugene Atkinson, Sr. passed away peacefully on Wednesday, April 20, 2022, at Twin Cities Hospital in Templeton, California one week after celebrating his 90th birthday and nine months after being at his beloved Jeanette’s side when she preceded him in death. Robert’s children, grandchildren, extended family, and friends mourn his passing in the hope of resurrection through his Lord Jesus Christ. Robert was born April 13, 1932, in Youngstown, Ohio to Shirley Donald and Lena Atkinson, the youngest of four children. After moving to Cleveland, he competed fiercely, often battered and bruised, in football and baseball at Brooklyn High School. He and Jeanette met and fell in love in high school, being known by all as the inseparable “Euge and Jay Jay,” beginning a romance that lasted through 68 years of marriage. During the Korean conflict, Robert answered his nation’s call and enlisted in the Army at age 19, becoming a Corporal in the elite 82nd Airborne Division, Pathfinders Platoon, stationed at Fort Bragg, North Carolina. He served skillfully as a paratrooper and impressed his commanding Staff Sergeant who wrote in a letter of commendation of Corporal Atkinson’s dedication and leadership gifts. Robert would use those leadership skills in a long and influential business career as a sales manager and then marketing consultant for numerous companies in the automotive aftermarket. He traveled extensively over the course of nearly seven decades, selling tools and equipment for major suppliers as well as enhancing the market profile of smaller firms. He was a beloved and respected presence at industry trade shows across the country. But the pride of his life, as he would often say, were his two children and two grandchildren. Robert Atkinson, Jr. was born in 1954 and Susan followed in 1958. Robert, Jr. wed Kathleen and Susan united with Clifford Olson. As a father-in-law, he embraced Kathleen and Cliff as his own children and deeply grieved the early passing of Kathleen in 2012. Grandchildren Nathan (1992) and Katherine (1996) were born to Clifford and Susan and Robert loved assuming the title, “Poppy,” telling these two often of his love and confidence in their futures. The family moved between Ohio and California over the years before Bob and Jay settled in the California Central Coast region in 1990. First, they owned a 10 acre “gentleman’s ranch” in Templeton, fulfilling their dream of country living, then moved closer to the town of Paso Robles. Nearby Trinity Lutheran Church became a very important setting for spiritual growth and service for Robert, where he participated in men’s Bible studies, served as an elder, advocated for the growth of Trinity’s school, and cultivated long-lasting friendships. Making and keeping friends was one of Bob’s strongest character qualities throughout his life until the end. After Jeanette’s passing last year, during his remaining months, he befriended many at The Oaks at Paso Robles senior living community. Robert is survived by his son Robert Atkinson, Jr., of La Canada-Flintridge; daughter, Susan Olson and son-in-law, Clifford Olson, of Gastonia, NC; grandson, Nathan Olson, of Winston-Salem, NC; and grand-daughter, Katherine Olson, of New York, NY. A family grave-side burial service will take place at Paso Robles District Cemetery on May 3, 2022, at 10:30 AM, followed by a memorial service for Robert and Jeanette at Trinity Lutheran Church of Paso Robles at 11:30 AM. In lieu of flowers, donations may be sent in his memory to Trinity Lutheran School (940 Creston Road, Paso Robles, CA 93446).

The family of Robert Atkinson Sr created this Life Tributes page to make it easy to share your memories.

Send flowers to the Atkinson family.