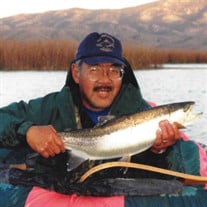 Nicholas “Nick” K.F. Auyong February 18, 1940 – April 10, 2021 On Saturday evening, April 10, Nicholas “Nick” K.F. Auyong passed away peacefully at his San Luis Obispo, California home at the age of 81. Nick was the oldest child of Steven Quon Mung and Evelyn Kam Moi Auyong. Nick was born in Honolulu, Hawaii. While in middle school, Nick excelled at baseball under the tutelage of his father who coached his Little League team. Nick attended Punahou High School and was a varsity standout player helping to capture the Hawaii State Championship three years in a row. Nick was also the starting halfback on the football team that played in the 1957 State Championship. He played baseball, football, and basketball at Punahou. He maintained his love of sports throughout his life, reveling in the athletic achievements of his daughters and his grandchildren, as well as the treasured friendships of many teammates, some of whom he met in elementary school. After graduating from high school, Nick attended Monterey Peninsula College (MPC) in California. It was at MPC that he met his future bride, Patricia “Pat” O’Reilly. Nick and Pat were married at St. Stephen’s Catholic Church in Hawaii in the late summer of 1961. Their first home was in San Jose, California, where Nick was studying Engineering at San Jose State. The young couple then made their way to San Luis Obispo – Pat’s hometown. Nick enrolled at Cal Poly, San Luis Obispo, as an Industrial Technology major, later switching his major to Social Studies, while Pat enrolled as an Education major. In 1962, Nick and Pat welcomed their first daughter Nicolette “Niki,” and then within the next two years another daughter, Natalie. Nick and Pat bought their first home in 1965 in San Luis Obispo. In late 1968, Nick and Pat’s third daughter, Claudine “Dede” was born. To support the young family, Nick worked at Atascadero State Hospital, in Atascadero, California, as a Psych Technician at night while attending Cal Poly during the day. In 1969, Nick was awarded his Bachelor of Social Science degree, and in 1970, a teaching credential. Nick’s family continued to grow with the addition of daughters Monique in 1970 and Patrice in 1973, rounding out his “basketball team,” as he used to put it. Nick began his teaching career as a 6th Grade teacher at Santa Rosa Elementary School in Atascadero, California, in 1970. He taught 5th and 6th grade at Santa Rosa Elementary and Santa Margarita Elementary, in Santa Margarita, California for a combined 25 years, retiring in 1995. Through teaching, friendships began that would endure for the rest of his life. In addition to athletics, one of Nick’s passions was fishing. His fondest memories from his childhood were going fishing and crabbing with his father and uncle. Nick enjoyed fishing all his life, whether off the Central Coast of California for salmon and halibut; on sand atolls off Christmas Island in the South Pacific; or flyfishing at various “secret spots” at lakes and streams in Idaho, Montana, Utah, and Nevada. Nick became an artisan at tying flies for fishing and is credited by Rocky Mountain fishing authority Bill Schiess in the book “Fishing Henrys Lake” with the creation of the “California Leech” pattern, a staple for catching trophy rainbow trout at Henrys Lake. In 2000, Nick had a fall from a ladder, confining him to a wheelchair. This did not stop Nick from fishing for another 15 years. Nick developed other interests after the accident. These included maintaining large aquariums in his home, including one saltwater tank stocked with tropical fish. Nick took up orchid gardening, maintaining at least two dozen plants of varying varieties and colors. He also enjoyed singing and playing the ukulele and taught some to the grandchildren to play as well. Nick especially loved having family pets, starting as a boy with his dog Queenie to his dogs Kimo, Makai, and Lani at the end of his life. Kimo, Makai, and Lani were rarely denied treats, table scraps, or vanilla ice cream hand-fed to them by Nick. Many will remember Nick’s quick-witted, and joking personality, whether pulling pranks as a high schooler, donning creative Halloween costumes during his teaching days, or having his grandchildren laughing with a practical joke or pun. Nick was preceded in death by his parents, Steven Q.M. Auyong in 1981 and Evelyn K.M. Auyong in 1992, and his sister Nola Auyong Henry of Olney, Maryland in 1987. He is survived by his wife of almost 60 years, Patricia, daughters, Nicolette “Niki” Muñoz (Anthony), Claudine “Dede” Auyong (Dave Svetich), Monique Speake (A.G.), and Patrice Auyong (Jack Bates), all of San Luis Obispo, California, and Natalie Hoxie (Sean) of Rancho Bernardo, California; and his sisters, Patricia Fujiwara (Clifford) of Aiea, Hawaii, and Marjorie Gonzalez (Don) of Makakilo, Hawaii. He is survived by eleven grandchildren, Allyssa Muñoz of Washington D.C.; Kyle, Will and Dana Hoxie of Rancho Bernardo, California; Lily Svetich, Rory Svetich, Brady Svetich, Duncan Speake, Holly Speake, Marco Auyong, and Scarlett Auyong, all of San Luis Obispo, California. Nick was interred at a private family gathering at Old Mission Catholic Cemetery in San Luis Obispo, California. Memorial services will be scheduled at a future date for a “larger than life” celebration of Nick. In lieu of flowers, it is requested that donations be sent to the Auyong Family Scholarship at San Luis Obispo High School, at www.bit.ly/2SiA2wq, Project Surf Camp at www.ProjectSurfCamp.com, or at Ride Above Disability at www.radtrc.com. Condolences and personal notes may be sent in care of Reis Family Mortuary in San Luis Obispo, California or at the website www.ReisFamilyMortuary.net/obituaries

The family of Nicholas K.F. Auyong created this Life Tributes page to make it easy to share your memories.

Send flowers to the Auyong family.