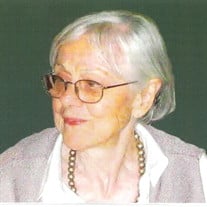 On September 7, 2021, Maureen D. MacMahon (nee Morgan) passed away peacefully of natural causes in San Luis Obispo with her children by her side, two months shy of her 95th birthday. Born and raised in Santa Maria, CA, daughter of Carl Lewis Morgan and Maxine Canet Morgan, Maureen was a 4th generation Californian with a long line of Spanish ancestry in San Luis Obispo County dating back to the late 1700's. Her mother, Maxine Canet Morgan, was a direct descendant of the Estrada family, who were some of the earliest California Rancheros with land grants including Rancho Santa Rosa and Rancho San Simeon. Maureen attended the University of California, Berkeley, where she studied liberal arts and was nominated Homecoming Queen. She began her professional career as a court reporter in San Francisco, CA and continued her career in the legal profession years later after raising her three children in Marin County, as well as Santa Maria, where she grew up. Maureen was a law librarian for the Santa Maria Law Library for many years, and continued this career path after moving to San Luis Obispo at the age of 62, where she became the Superior Court Law Librarian for San Luis Obispo county for the next 23 years. Maureen had a passion for arts and culture, with a keen eye for special antiques, and loved spending time antiquing in local shops, always sharing those beautiful treasures with her family and friends. Maureen was an elegant woman with exquisite taste who instilled in her children the same appreciation for classic, sophisticated style, timeless treasures, and a strong sense of ancestral history. Maureen was a devoted mother and will be deeply missed by her three surviving children, Kathleen Anne MacMahon, Moira Elizabeth Regueiro, and Carl Morgan MacMahon. She was always there for her children every moment of her life providing endless love, support, and guidance throughout their lives. She is also survived by her three grandchildren, Joseph Morgan Harrington, Maxwell McCord Harrington, and Isabel Judith Regueiro, as well as her son in law, Richard A. Requeiro. Services will be held at the Mission San Luis Obispo de Tolosa on November 5, 2021 at 10am and open to the public. In lieu of flowers, please consider a donation to plant a memorial tree in Maureen's honor and memory.

On September 7, 2021, Maureen D. MacMahon (nee Morgan) passed away peacefully of natural causes in San Luis Obispo with her children by her side, two months shy of her 95th birthday. Born and raised in Santa Maria, CA, daughter of Carl Lewis... View Obituary & Service Information

The family of Maureen MacMahon created this Life Tributes page to make it easy to share your memories.

Send flowers to the MacMahon family.