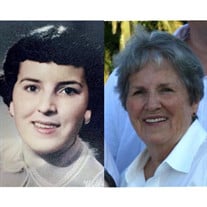 Marilyn Britton was born in San Luis Obispo, in 1939, to Albert and Nadine Martin. She is a graduate of Atascadero High School and Cal Poly. She met her husband, Glenn Britton, at Cal Poly in 1957 and they married in 1959. They belong to Highlands Church in Paso Robles. Marilyn lived her life devoted to family and her extended family in agriculture. As a longtime employee of the San Luis Obispo County Farm Bureau, she was the first to be titled Executive Director. She is widely considered the " Mom of San Luis Obispo County Farm Bureau". Her office was always open to people who needed help or information. As an administrator and manager, Marilyn set a benchmark for service. As a member, she set an example for others. Marilyn was not only a Farm Bureau member and manager, but also a member of California Cattlewoman, California Cattlemen's Association, Edna Farm Center, Farm Bureau Women, and a Director of Coast National Bank. As Executive Director, Marilyn set in place the operation and protocol of an ever growing local Farm Bureau. She met challenges and changes as our agricultural region developed. She worked with members and directors on important policy recommendations for the Farm Bureau; articulated the rural lifestyle and economic importance of San Luis Obispo County crops; launched tours for the agricultural community to other parts of the state, nation, and internationally. Marilyn took an active role in the Paso Robles Chamber of Commerce Agri-business tours. She enthusiastically participated in events that respected the community relationships in agriculture, including Cattlemen and Farmers Day at the Mid State Fair, and a host of other annual gatherings. Marilyn has been honored for her work by numerous entities and organizations over the course of her 30 plus year career. Marilyn was named the 2018 Agriculturist of the Year by the San Luis Obispo County Farm Bureau, Marilyn and Glenn were inducted in the California Mid State Fair hall of fame in 2012, and they shared a Farm Bureau "Freddy of the Year Award" in 2002. She was also honored as Cattlewomen's "Cowbell Mom" in 2002; and recognized with a "Strength In Diversity Award" In 1992. Marilyn was also recognized by the San Luis Obispo County Board of Supervisors upon her retirement in 2001 for her accomplishments and service to San Luis Obispo County. These awards and her friendships in the community meant the world to her. Marilyn is survived by her husband, Glenn, their children: Patty (Tim) Robasciotti; Gary (Angie) Britton, and their children Nate (Leah) Anguiano, Justin (Kaycee) Anguiano, Garrett (Hannah) and Grant (Diana); and Geoff(Michelle) Britton, and their children, Geoff, Gerrod, Cali, and Gabi, as well as, eight wonderful great-grandchildren. Marilyn was also extremely proud of her four grandson's service in the United States Air Force, United States Marine Corps, and United States Coast Guard. Marilyn was the best mom, grandmother, great grandmother, and friend to anyone she met. Marilyn passed peacefully on Friday October 8th. Per her request, no services will be held. No flowers or gifts please. If you wish, consider a donation in her name to Ag the classroom(learnaboutag.org), the San Luis Obispo County Foundation for Agricultural Awareness, California Corporation #C2110867; a 501(c)3 nonprofit, or the San Luis Obispo Agricultural Education Committee, California Corporation #C1995092, a 501 (c)3 nonprofit.

Marilyn Britton was born in San Luis Obispo, in 1939, to Albert and Nadine Martin. She is a graduate of Atascadero High School and Cal Poly. She met her husband, Glenn Britton, at Cal Poly in 1957 and they married in 1959. They belong to Highlands... View Obituary & Service Information

The family of Marilyn Britton created this Life Tributes page to make it easy to share your memories.

Send flowers to the Britton family.