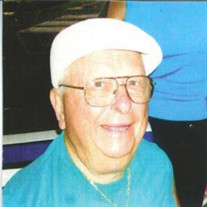 - It is with great sadness that the family of Louis (Lou) Lawrence Guidetti announces his sudden passing.Lou died on July 5, 2021,eight and a half months into his 100th year. Lou lived his 99 years to the fullest. Lou was born to Lawrence and Rose (Machado) Guidetti on October 21, 1921 in San Luis Obispo. He spent his first few years on the ranch in Los Osos before the family moved to Edna. Lou graduated from San Luis Obispo High School in 1940. During high school, he worked at Genardini’s Men’s Store. Lou performed in many plays during high school and after high school, acted with the San Luis Obispo’s Little Theater until joining the Army. In 1942, Lou joined the United States Army and was sent to the European front. He landed in Normandy six days after D-Day. He was attached to Dwight D. Eisenhower’s staff and was discharged, with distinction, at the end of WWII. In 1951, Lou was recalled by the Army and served in the Bay Area until he was again discharged in 1953. Upon returning home, Lou went to work at Wickenden’s Men’s Store where he was promoted to the position of manager after Leonard Larson left to open his own store, the Village Squire. When Wickenden’s sold out to Grodin’s, Lou stayed with the company until it closed. He opened his own store, Guidetti’s Store for Men, in the newly formed Mission Plaza. Upon closing his store, he managed the men’s store at the Madonna Inn for several years. Lou ended his career at a clothing store in Santa Maria which is now closed. While working at Wickenden’s, Lou met the love of his life, Don Yoder, who worked at Charles Shoes. Lou and Don loved to travel and went to many wonderful and colorful destinations. Lou’s favorite trip was an African Safari, which included a side trip to Egypt. This was followed by the 20 years of annual trips to Maui, staying three weeks each time celebrating Lou’s Birthdays. Lou enjoyed their annual Mardi Gras trips to New Orleans always bringing back beautiful memories. Lou was a founding member, and president, of the Cabrillo Cymbidium Orchid Club. He was a member of the first San Luis Obispo Little Theater group which performed at the Elmo Theater. Lou also belonged to the American Legion, the 20/30 Club and he supported the SLO High School Multi-year luncheons which were held monthly at the Elk’s Club. Lou was preceded in death by his parents, Lawrence and Rose Guidetti, his brother, Albert, his sisters, La Verne Robasciotti and Elaine Vaca, his nephew, Jeffry Phelan his niece, Valerie Vaca and his nephews, Chuck and Larry Vaca. He leaves his loving mate of 63 years, Donald Yoder; his sister, Donna Phelan; nieces, Annette Robasciotti Grossi, Debi Robasciotti Foster, Pam Vaca Dorgeloh, Kathryn Phelan Smith; nephews, Rick Robasciotti; Michael (Mikie) Phelan and Dennis Vaca; 22 great nieces and nephews and 21 greatgreat nieces and nephew; and Lou and Don’s dear friend, Lorenzo Murguia. Lou was the town historian, known by many as, “The Mayor”. Lou had nearly a century of knowledge about San Luis Obispo and the families who lived here. He was always eager and willing to share his treasure trove of history and memories. He will be sorely missed by all those who knew and loved him. There will be a Viewing and a Rosary on Sunday, July 11, 2021 at Reis Memorial Chapel (991 Nipomo St., San Luis Obispo). The Viewing will be from 4:00 PM to 6:00 PM with a Rosary to follow. A Requiem Mass will be held at the Old Mission de Tolosa (751 Palm Street) on Monday, July 12, 2021 at 10:00 AM. A reception at the Madonna Inn to celebrate Lou’s life will follow the Mass. A private family burial at the Los Osos Valley Memorial Park will occur at a later date.

- It is with great sadness that the family of Louis (Lou) Lawrence Guidetti announces his sudden passing.Lou died on July 5, 2021,eight and a half months into his 100th year. Lou lived his 99 years to the fullest. Lou was born to Lawrence and... View Obituary & Service Information

The family of Louis Guidetti created this Life Tributes page to make it easy to share your memories.

- It is with great sadness that the family of Louis (Lou) Lawrence...

Send flowers to the Guidetti family.