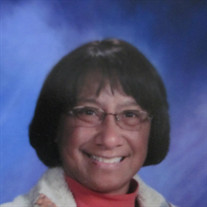 Adeline (Frances) Ubay Corpuz Orr November 16, 1956 – November 20, 2021 Adeline (Frances) Ubay Corpuz Orr was born on November 16, 1956 in San Luis Obispo, CA to Severo and Pacita Corpuz. She passed away on November 20, 2021 in Santa Barbara, CA. She is survived by her husband Bruce and their two sons, Brian and Michael, her brother Robert [Lisa] and their children Madison and Shelby, her nephew Daniel and his children Ethan and Lily. She is also survived by several aunts, uncles, and cousins. She was preceded in death by her father in 1986, her sister Elaine in 2006, and her mother in 2018. Adeline was raised in Los Osos, CA, and attended Sunnyside Elementary School and Morro Bay Junior-Senior High School, graduating in 1974. She was active in high school, participating in orchestra and various campus organizations. Following high school, she attended Cuesta College, graduating in 1976, and soon thereafter began working as a receptionist at a doctor’s office in Morro Bay. In later years she especially enjoyed attending her high school reunions and was instrumental in working with reunion organizers to locate and invite “lost” classmates. Next, she worked in the electrical contractor’s document/print control department during construction of the Diablo Canyon Power Plant in Avila Beach, CA, which changed the trajectory of her life, as this is where she first met Bruce. She then moved onto a similar role at Vandenberg Air Force Base near Lompoc, CA and assisted Bruce in landing an interview as an engineer at Martin Marietta, one of the largest employers on base. He got the job! Bruce and Adeline were married on August 30, 1980 in Morro Bay, CA. She continued working at Vandenberg for a couple of years following the birth of their first son Brian in 1986, then put her career on hold to become a stay-at-home Mom to Brian and their other son Michael, born in 1991. Adeline re-entered the workforce in 2004 after their boys had grown some, starting a very productive and fulfilling career in education. She first became a reading tutor for a couple of years at Hapgood Elementary in Lompoc just down the street from their home, then passed a test to acquire her librarian credentials and took a temporary librarian position at an elementary school near Vandenberg that was scheduled to close in one year. Fortunately, there was a full-time permanent librarian position available at Fillmore Elementary School at Lompoc the following school year, which she gladly interviewed for and was accepted. Fillmore provided the opportunity for Adeline to make an incredibly positive, indelible impact on her students. During her 10-year tenure there, each class would go to the library once a week, and Adeline would read to every class. She especially loved reading to her kindergarten through 2nd grade students. She stressed the importance of reading and looked forward to decorating her library with a new theme each month throughout each school year. There are countless stories of Adeline running into former students while running errands in Lompoc, some now in high school or even college, who would scream “Mrs. Orr!” and approach her with a big hug. And without fail, Adeline remembered the names of all her former students. She loved being a librarian and it brought her so much joy to interact daily with her students. Adeline possessed the best qualities and traits of her parents. She got her work ethic, values and principles from her father, and while she also received those same qualities from her mother, Adeline also received from her mother her precious, soft qualities that many of us are so familiar with, including her kindness, generosity, and sense of humor. As her family, relatives, and close friends know, Adeline had many talents and interests. She was very creative in arts and crafts, as evidenced by her holiday decorations both at home and in her library. She enjoyed cooking and possessed a large collection of recipes and cookbooks. However, many of us are most familiar with her baking skills, again especially during the holidays. Some of our favorite desserts included her pumpkin pies, apple pies, carrot cakes, snickerdoodles, and lemon bars. Adeline loved music, especially from the 1970s. She had a formidable vinyl record and CD collection, including those of her favorite artists, including Carole King, James Taylor, Heart, Elton John, Steely Dan, and the Eagles, just to name a few. Adeline was humble, smart, energetic, and young at heart. She was a devoted wife, mother, daughter, sister, and aunt, and she had a legion of loyal, longtime friends. In addition, she was a bright light who advocated for those she felt were underserved or underrepresented. Though her light has dimmed, her legacy lives on forever through the lives she’s touched. We can best honor her memory by paying forward her kindness and generosity.

The family of Adeline C. Orr created this Life Tributes page to make it easy to share your memories.

Send flowers to the Orr family.